When bad luck strikes it takes a moment to change everything.

Due to heavy snowfall mountain passes become impassable during winter and some villages in Zanskar valley remain isolated from outside world. From ancient times frozen Zanskar river is used as a trade route to connect Leh in winter. This trek starts from Leh in Ladakh, literally “the land of high passes”, lies between the Himalayas and the Kunlun mountain range at a height of more than 3,000 Metres (9,800 feet). The trek itself is not that difficult if everything goes in your favor . It can be extremely challenging and dangerous if conditions are not ideal. If Chadar (ice sheet) is not formed properly or not thick enough then the only option is to circumvent the river by climbing rocks around the gorge which is extremely difficult at times. Walking on Chadar is tricky because it is slippery and if Chadar is not thick enough one can go down in the river and die of hypothermia. So you need to walk like Penguin and should be able to judge thickness of ice otherwise that might be your last step. Crampons are not helpful because it can get stuck in small fissures and that means a sure fall. 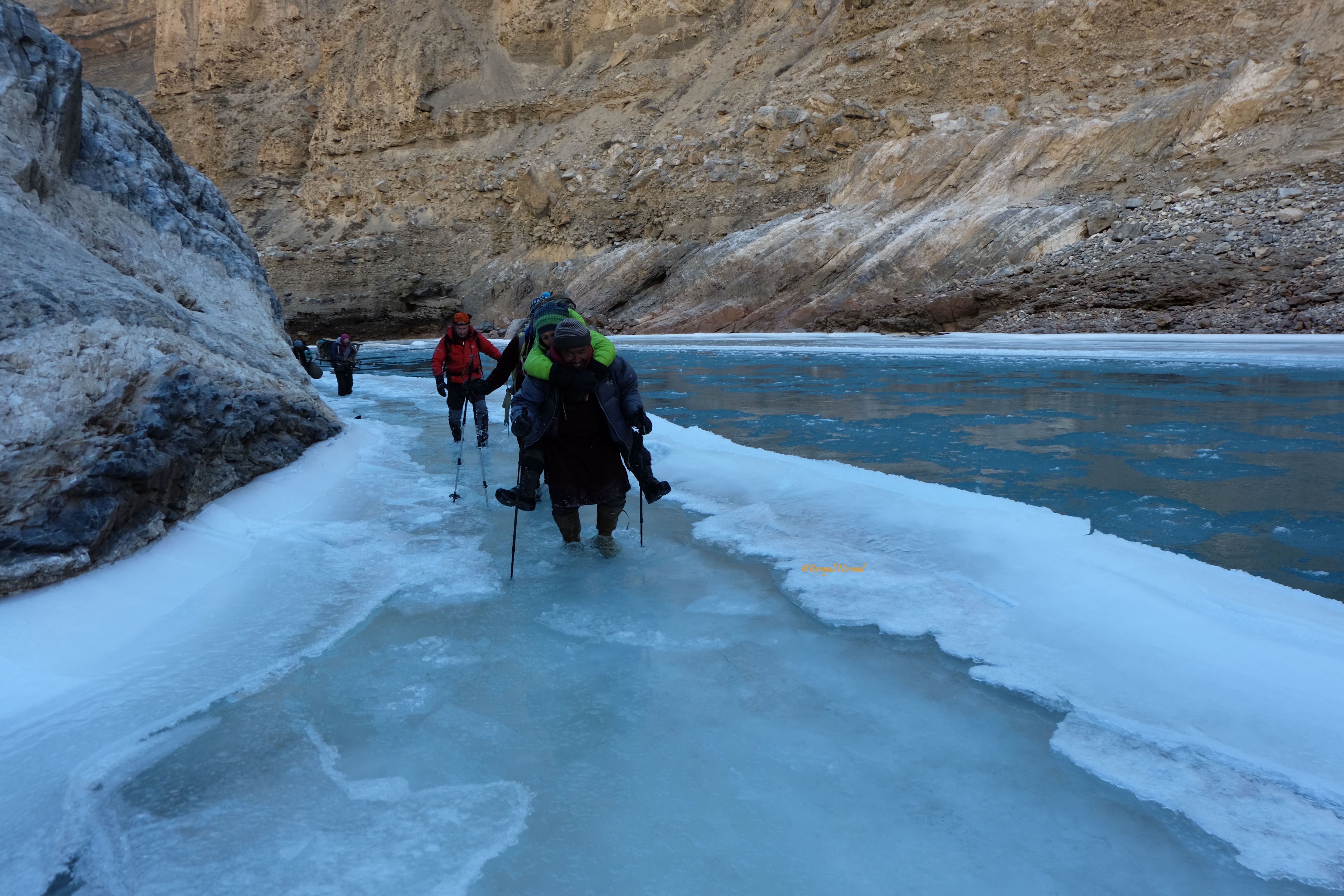 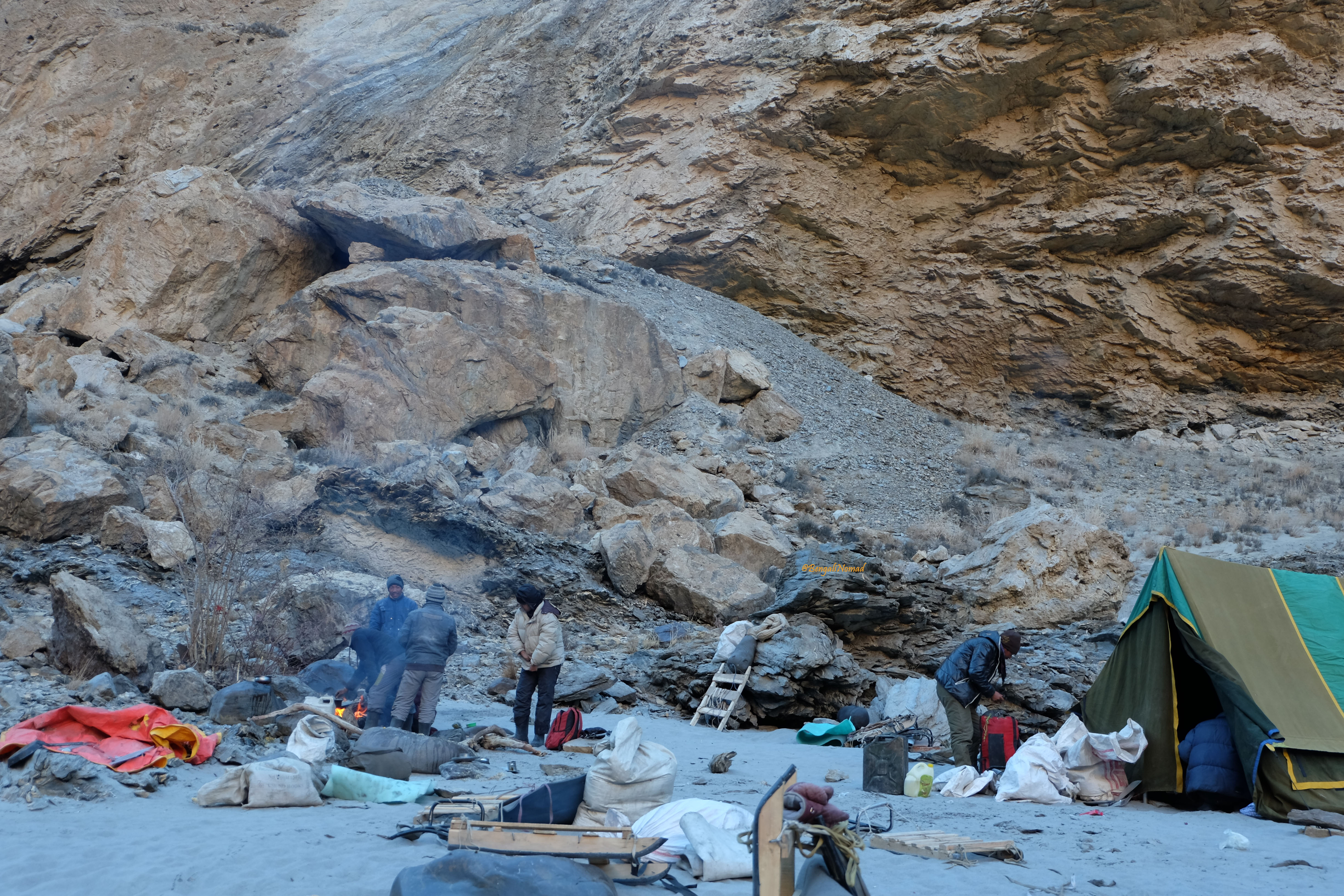 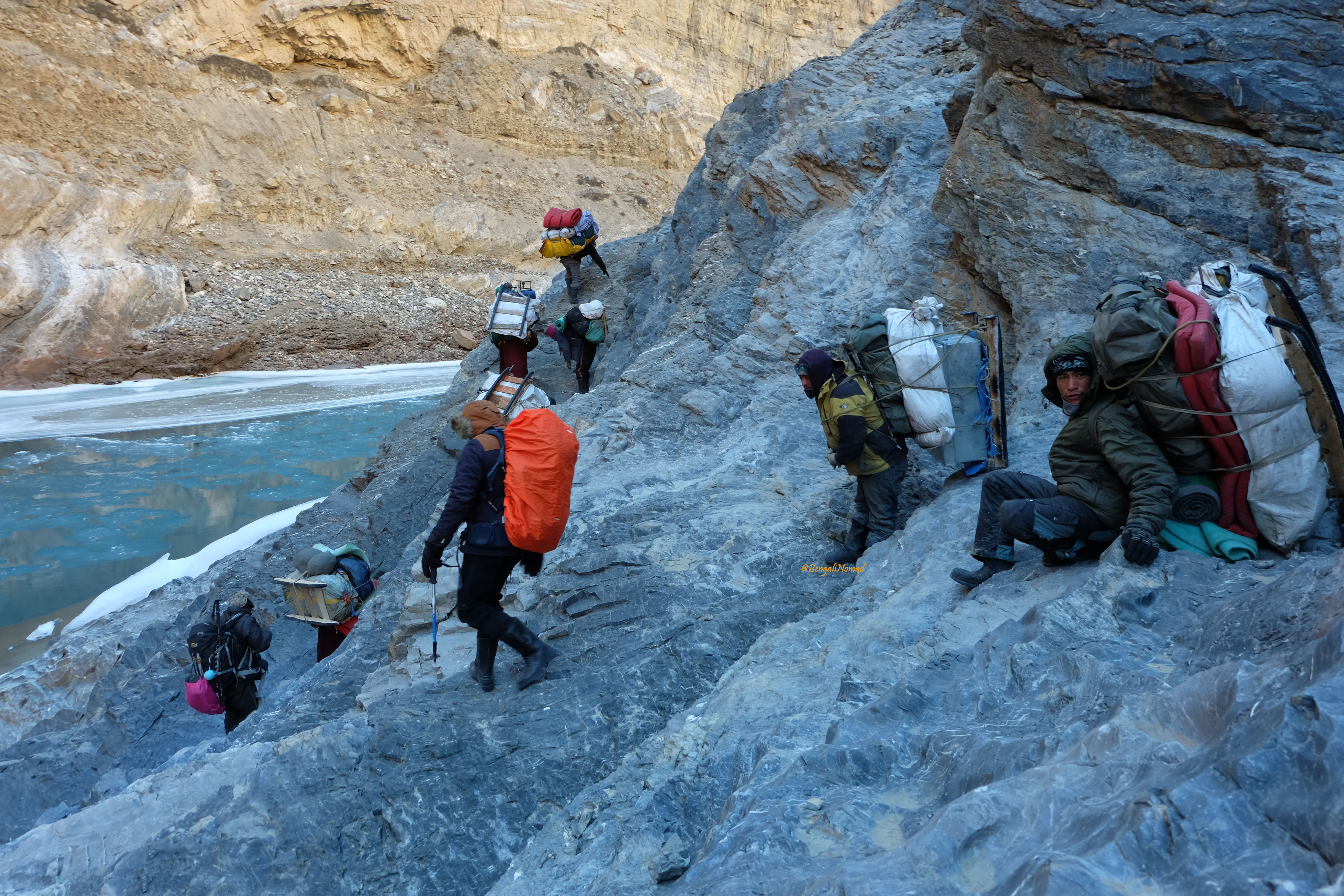 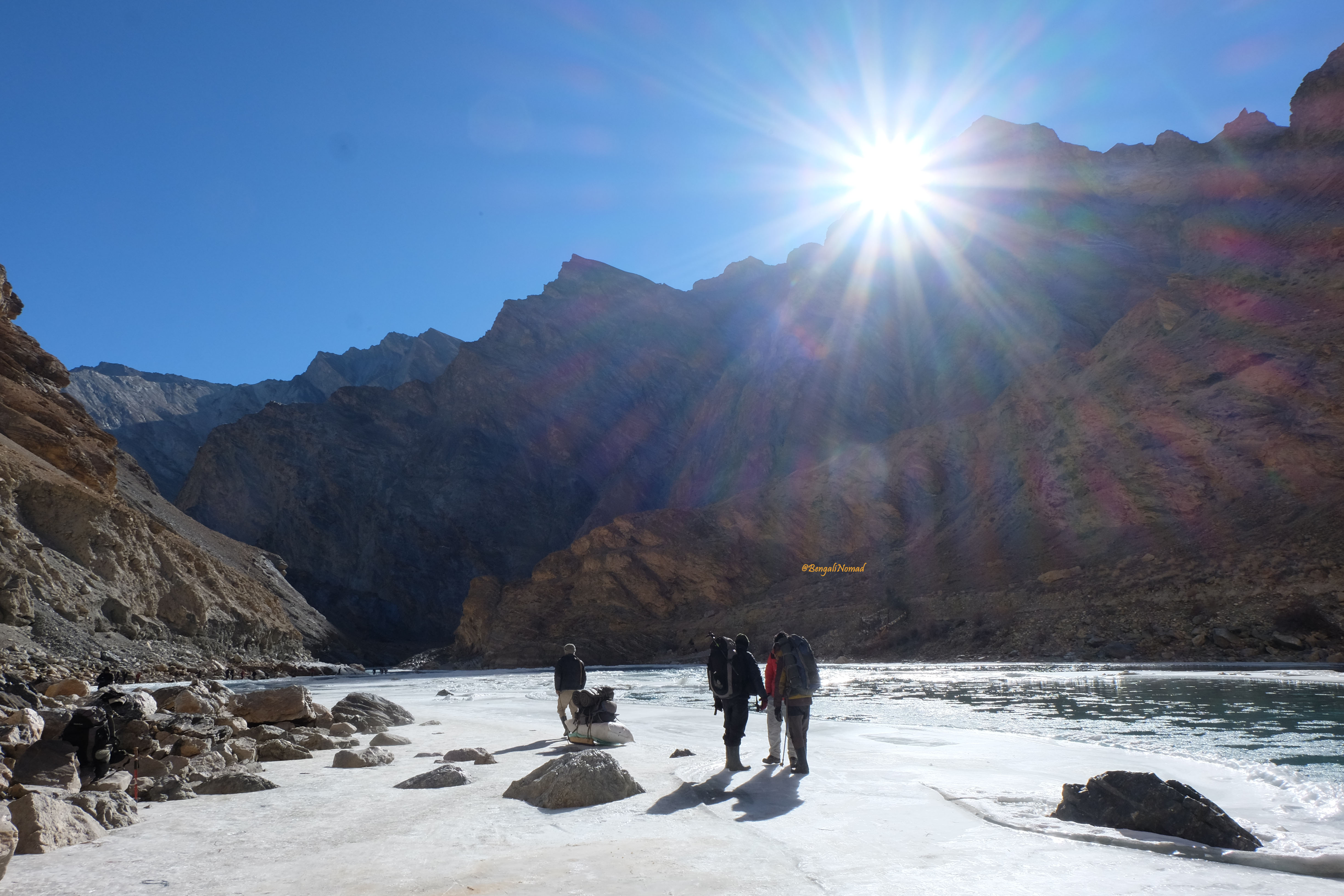 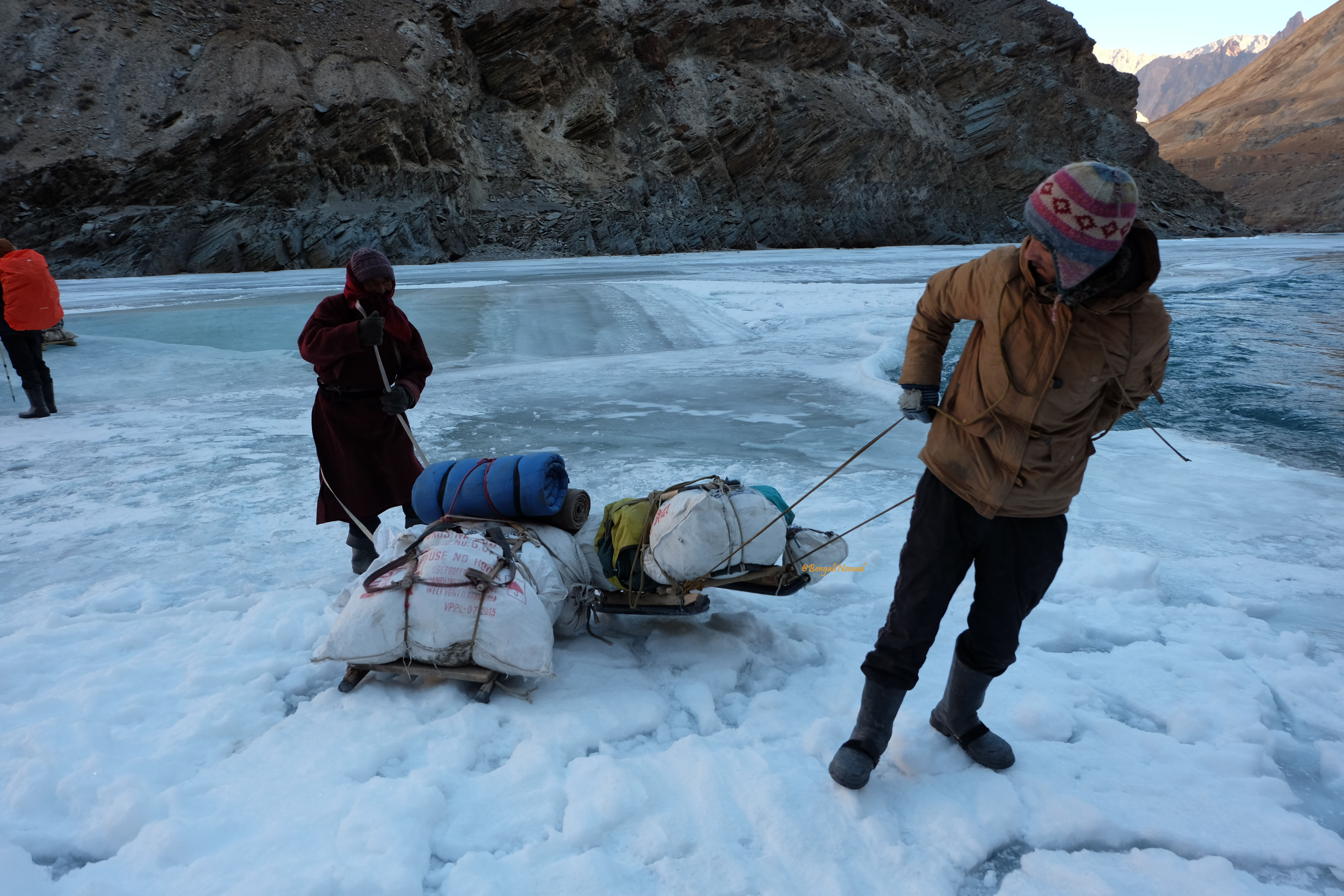 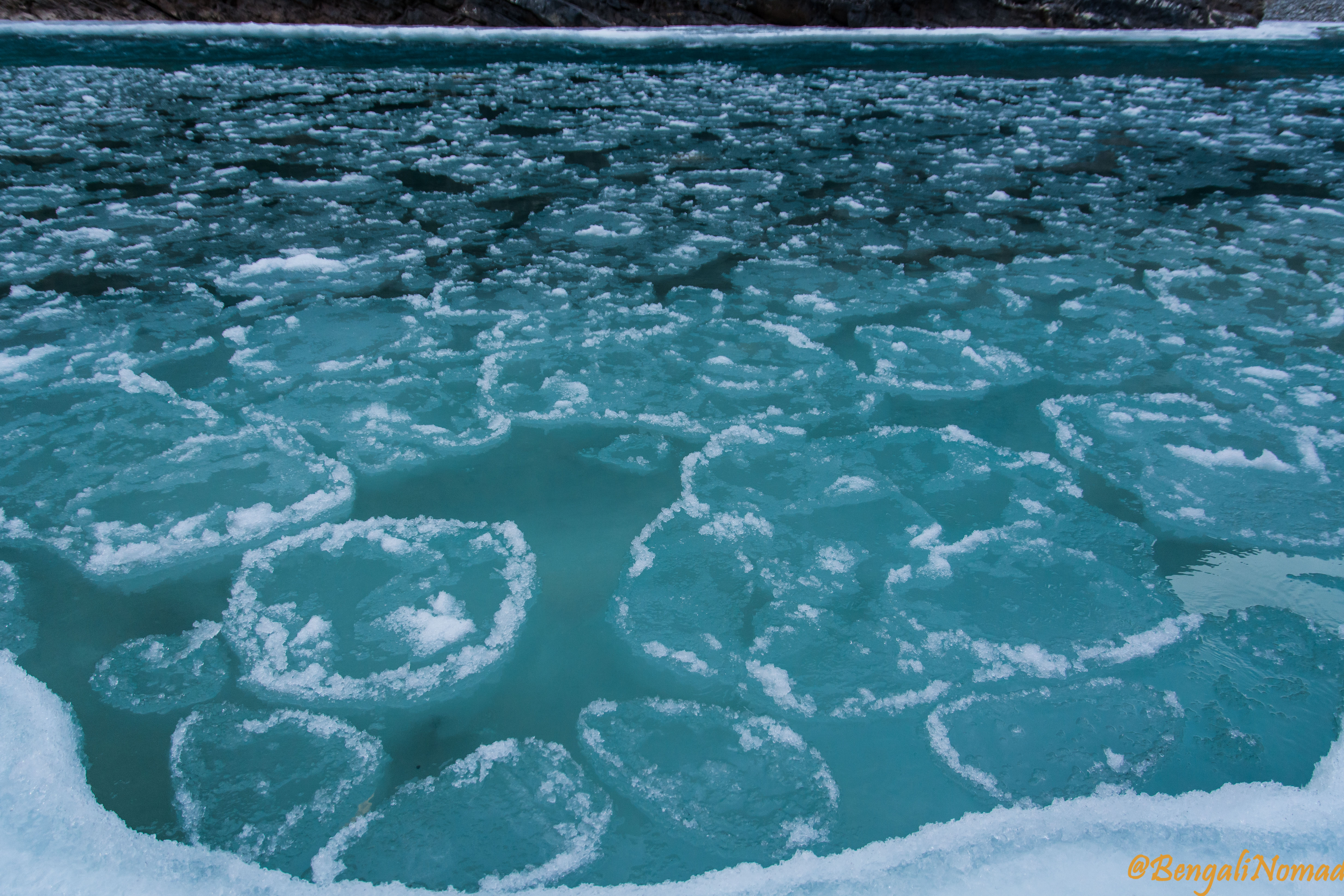 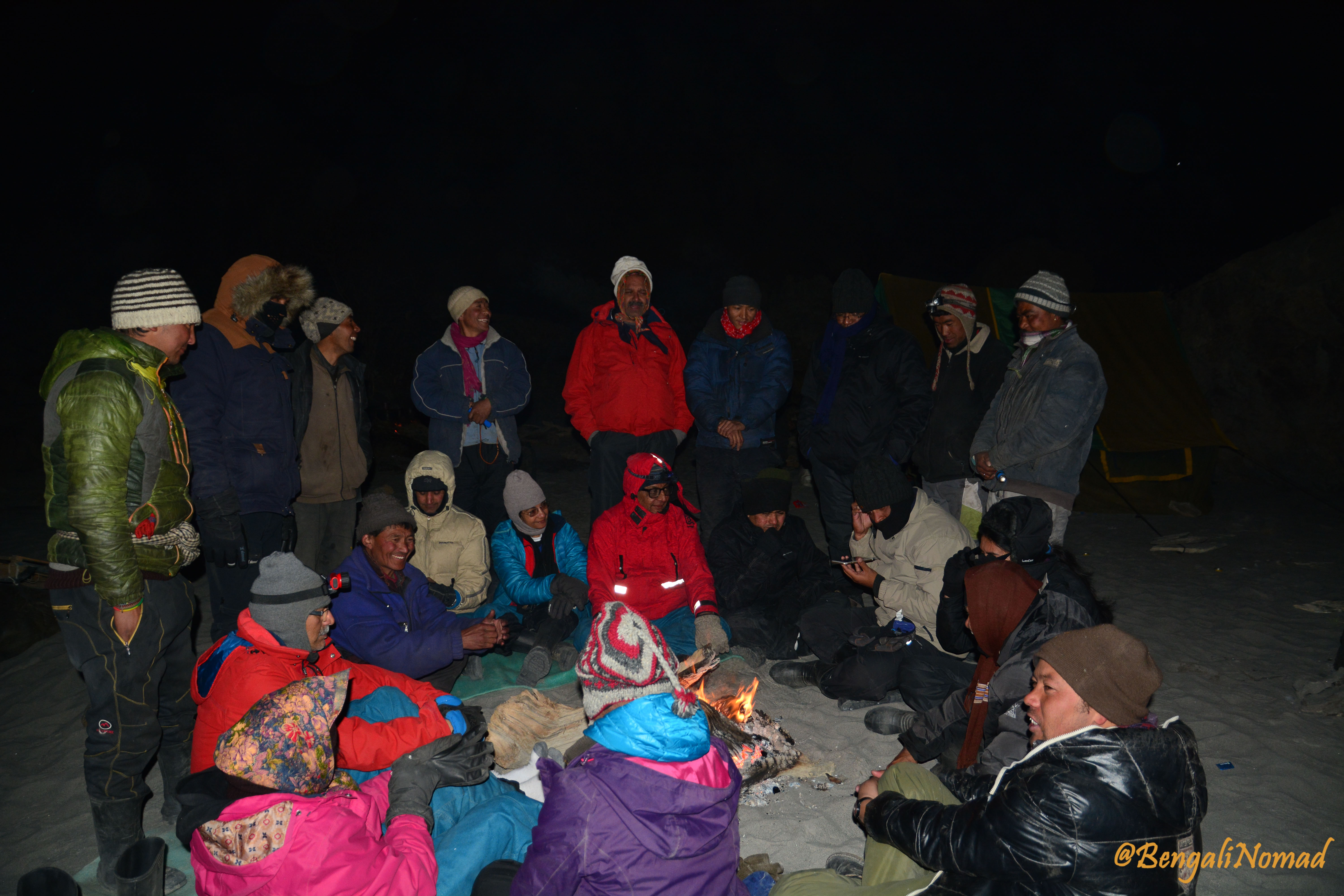 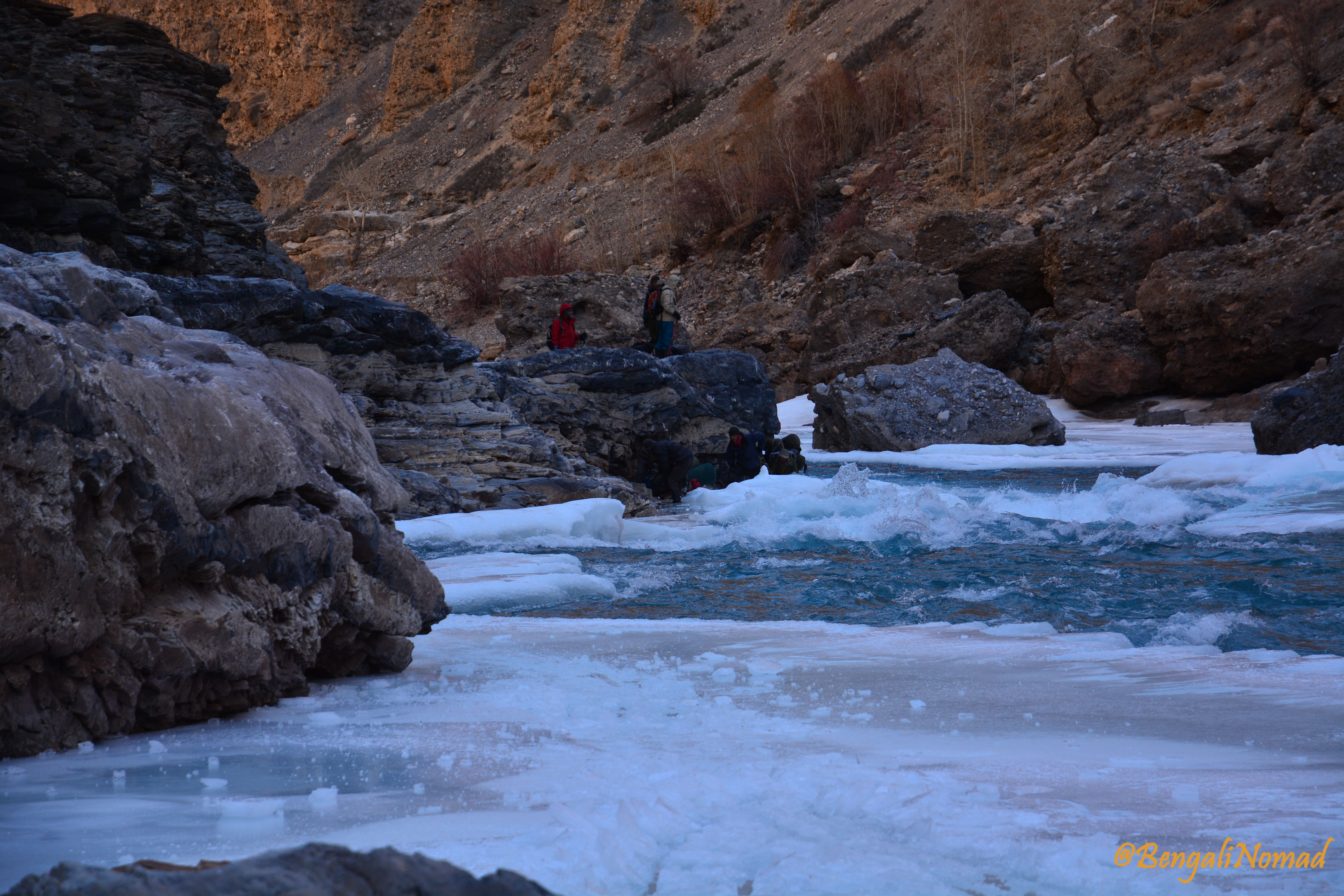 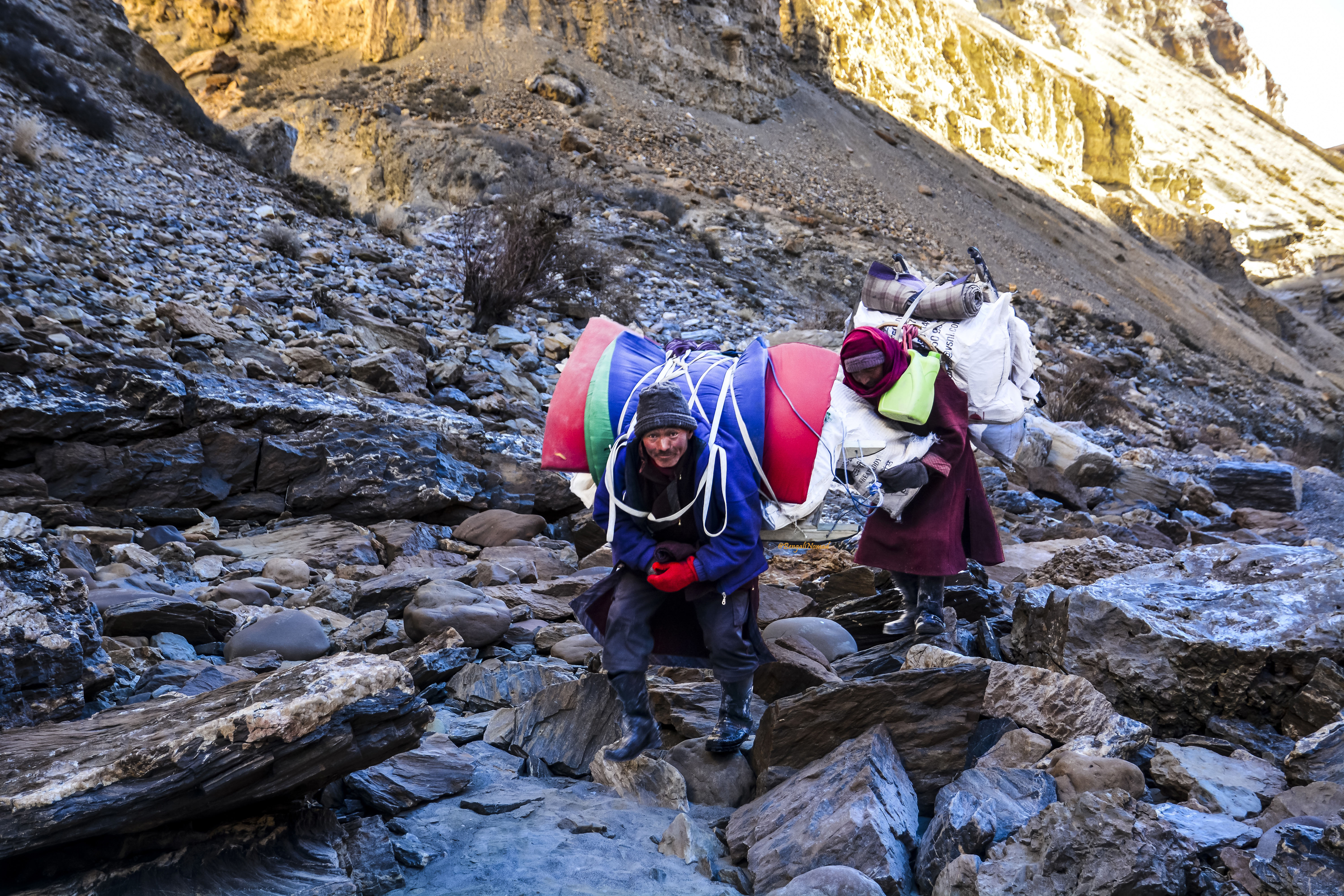 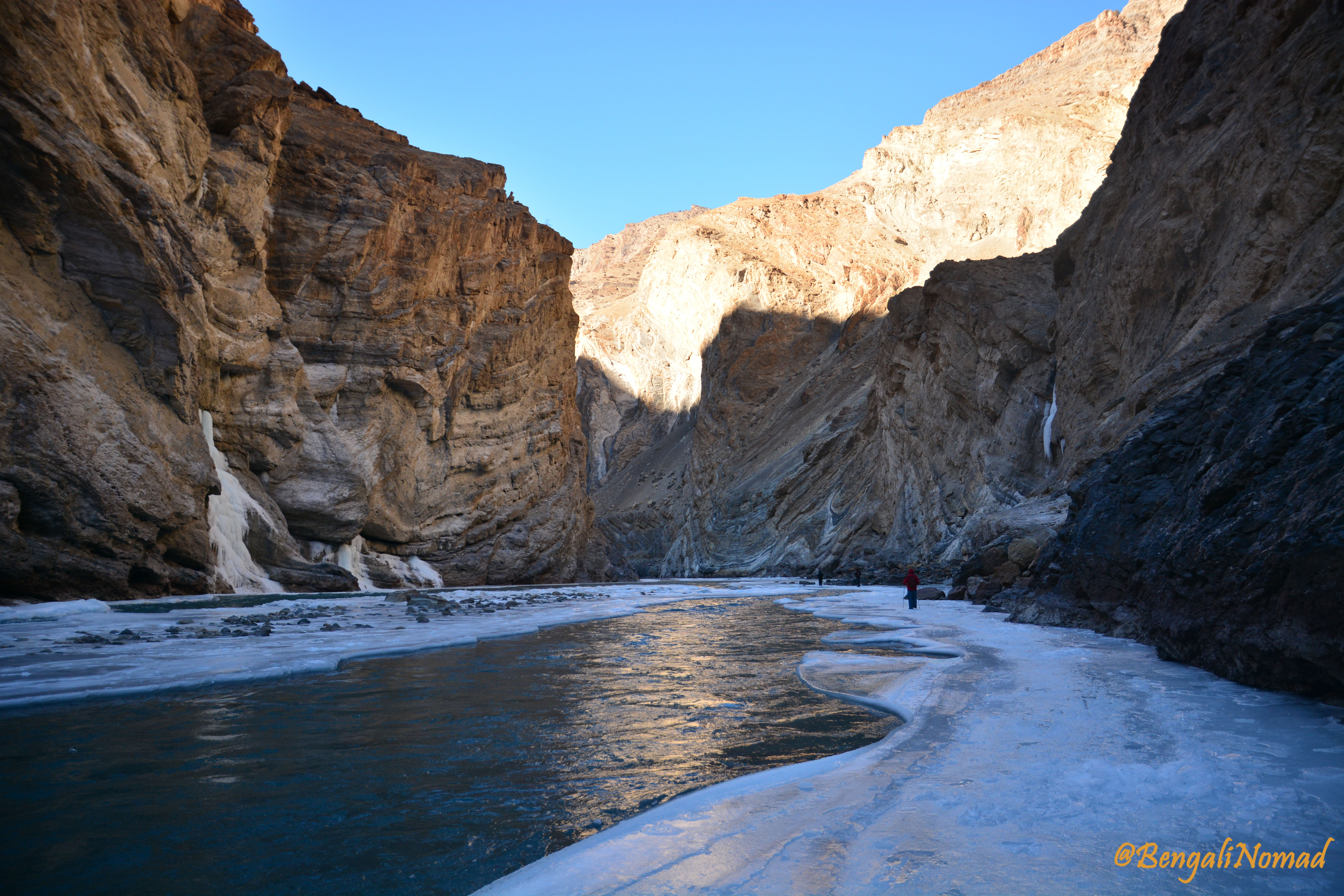 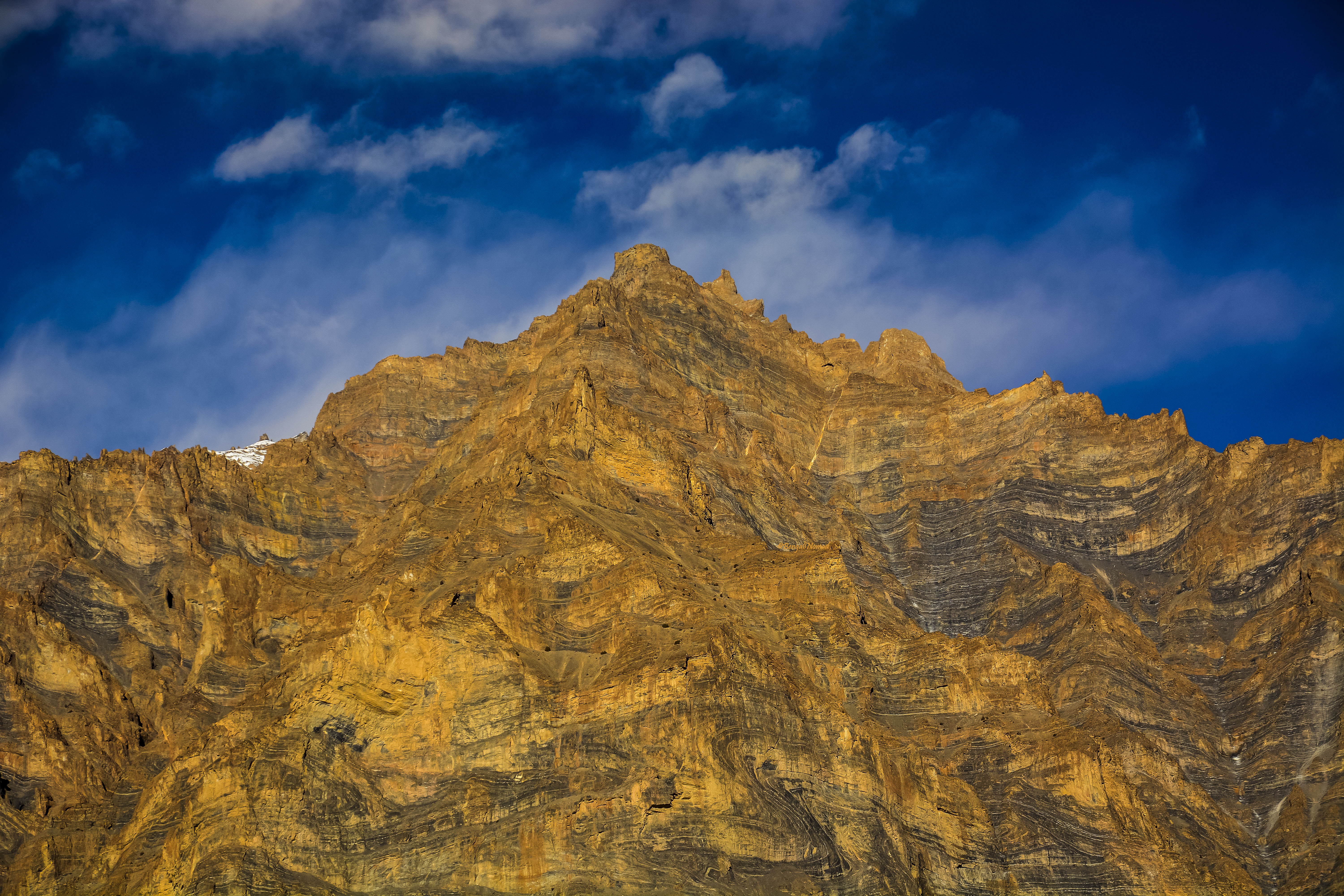 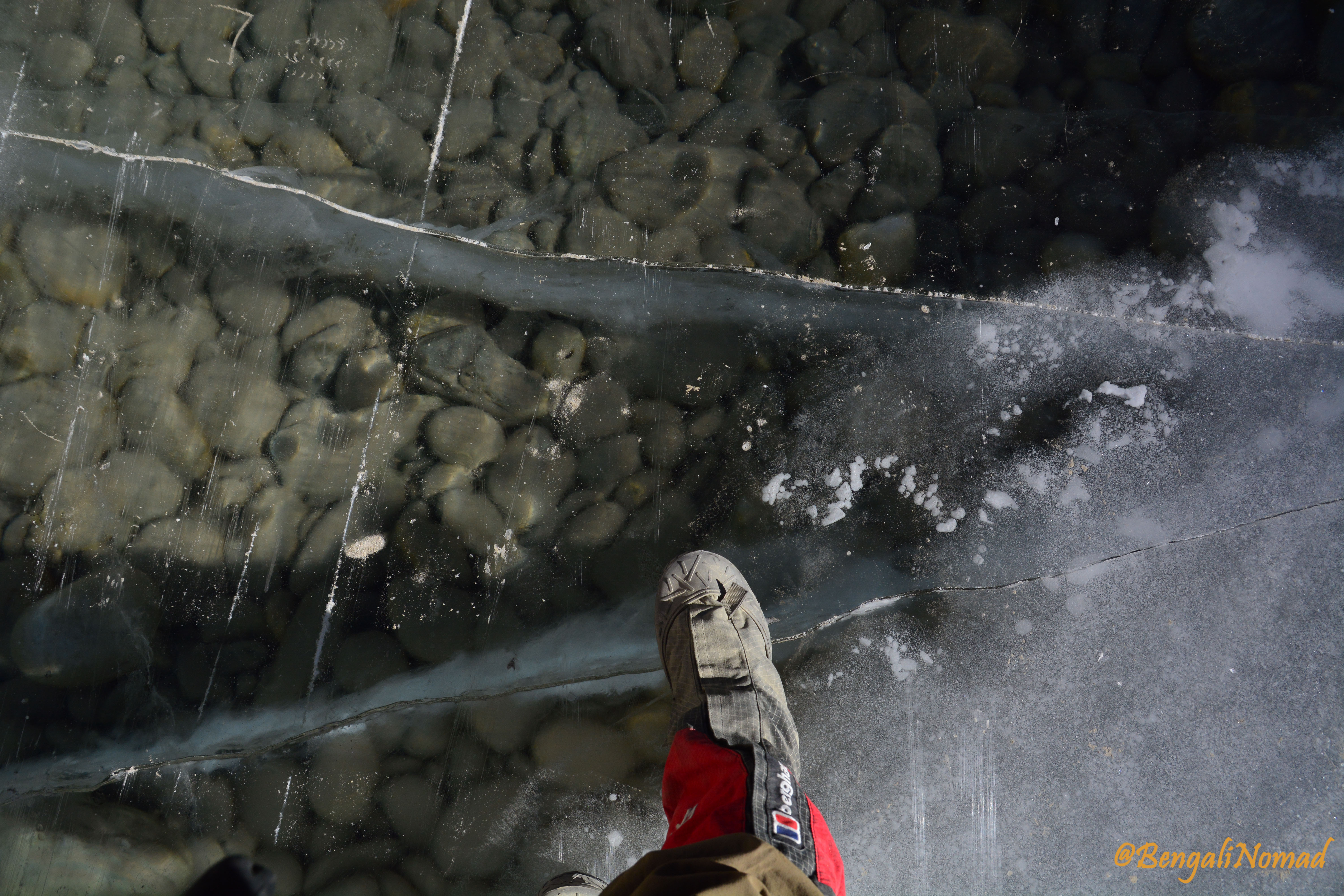 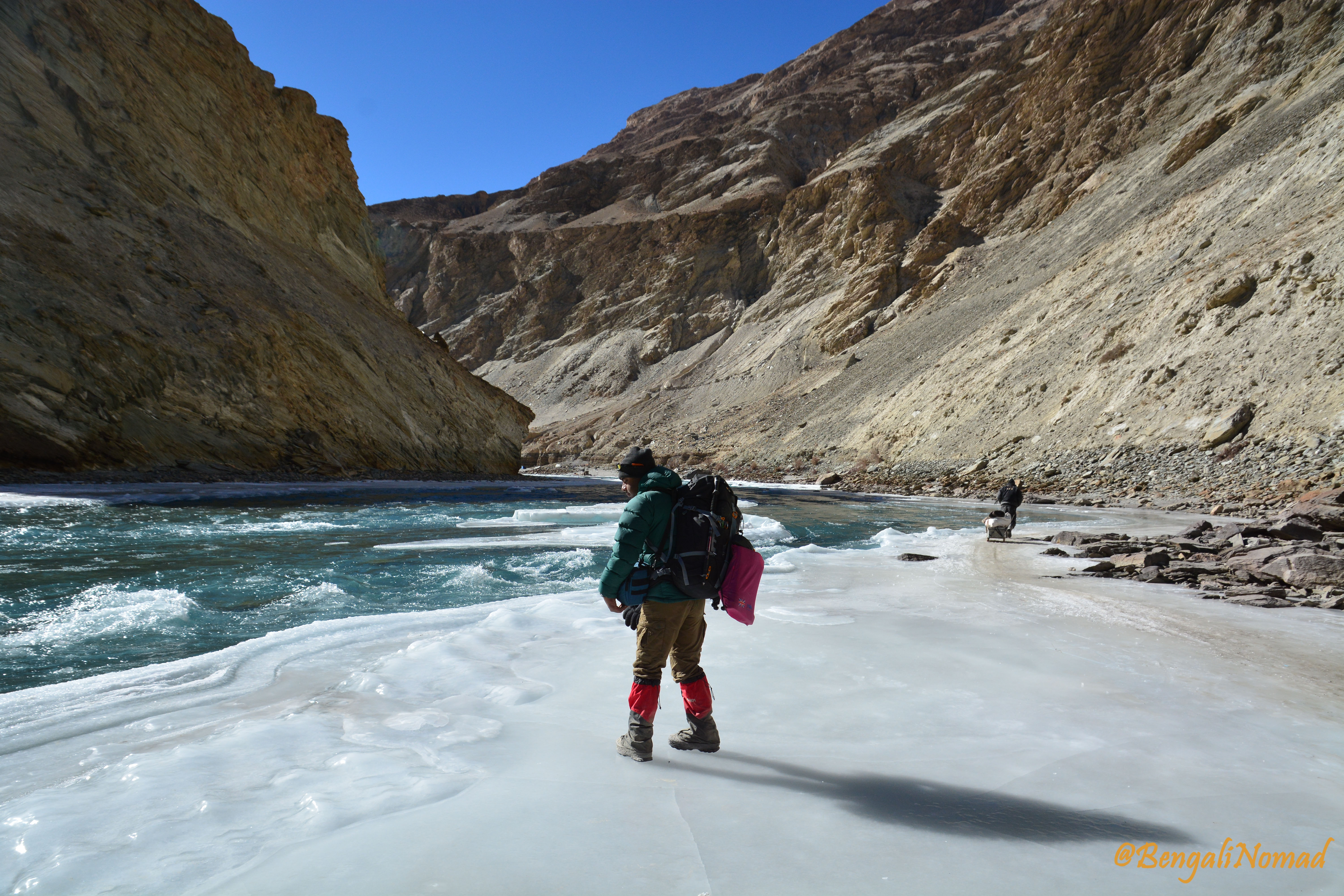 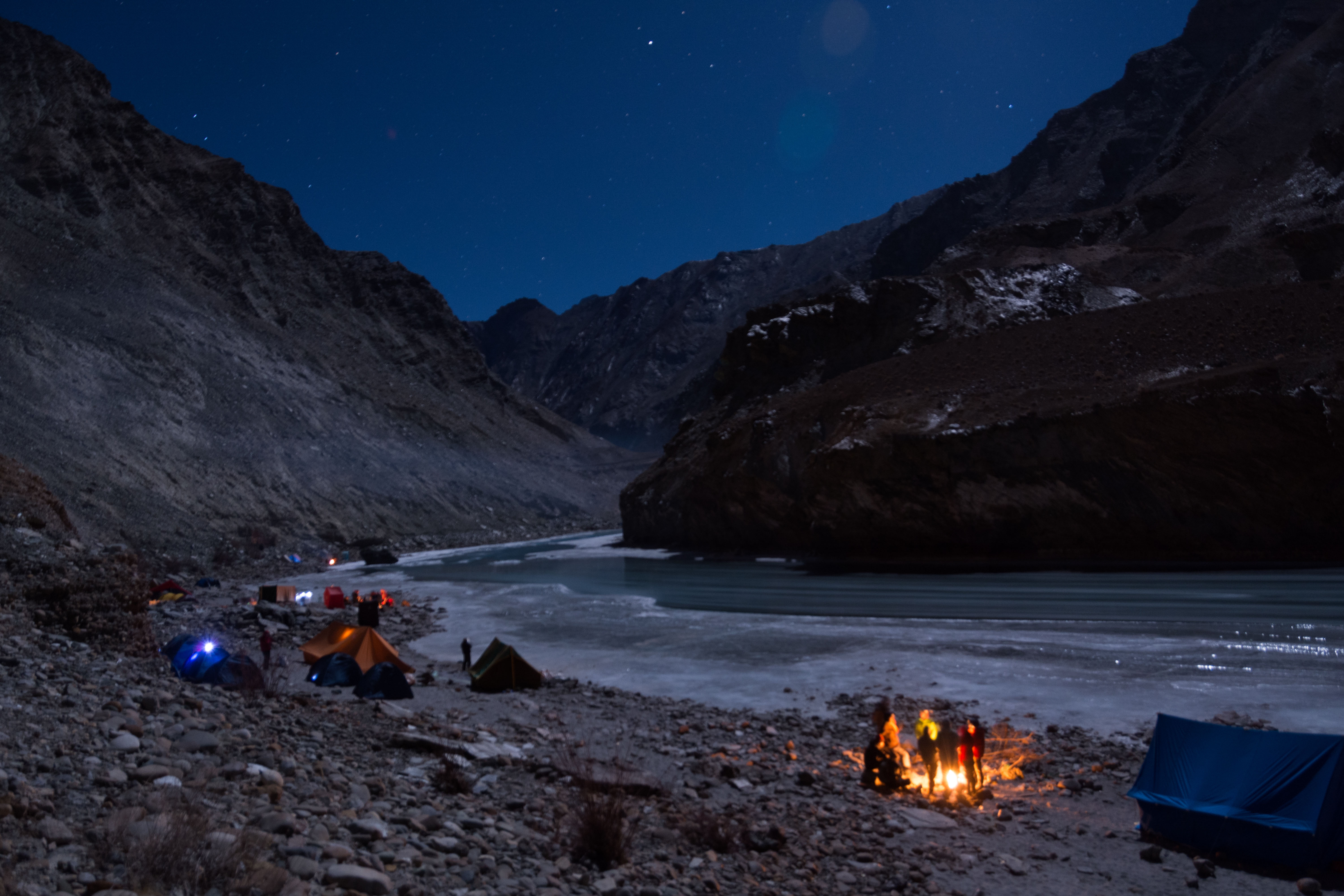 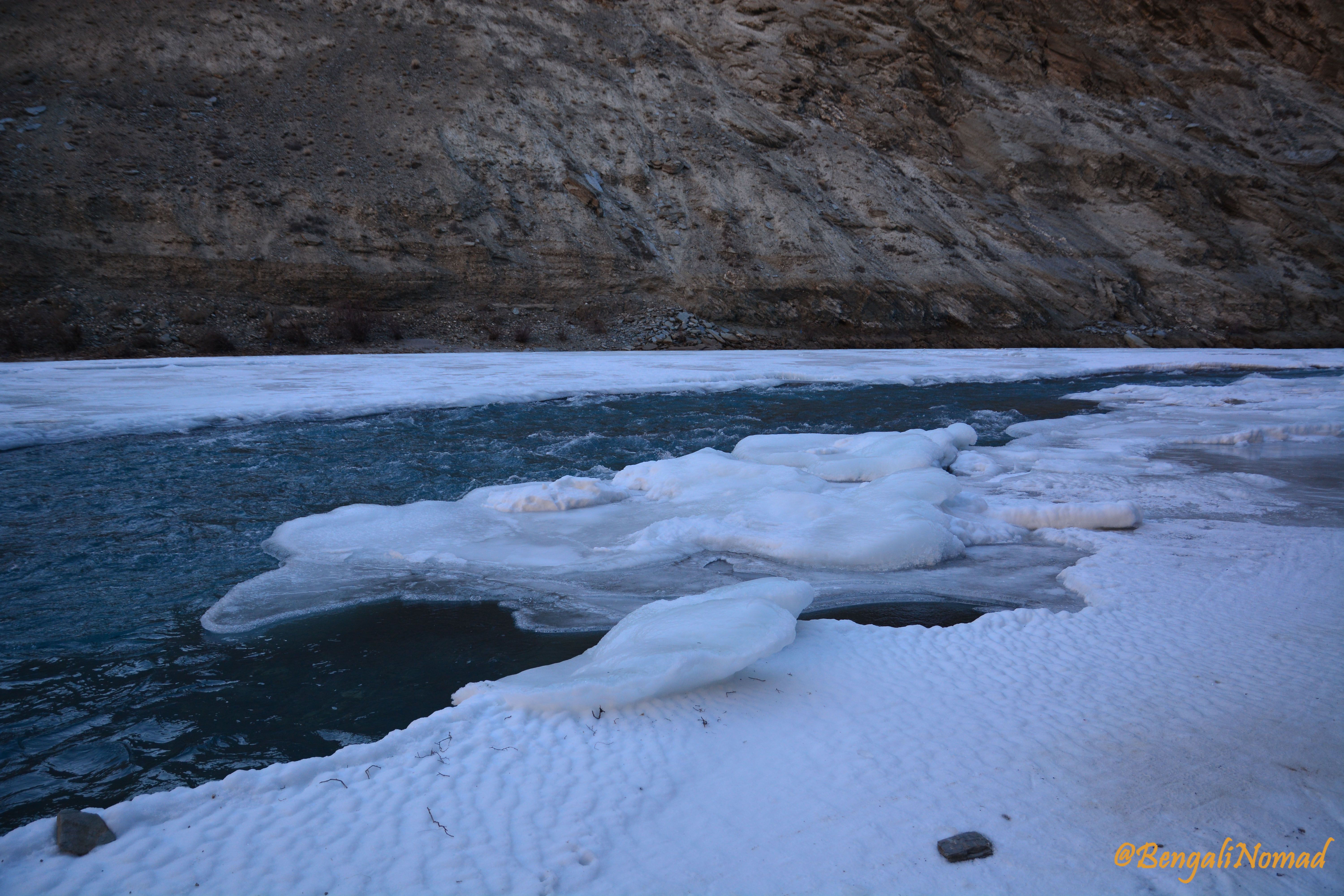 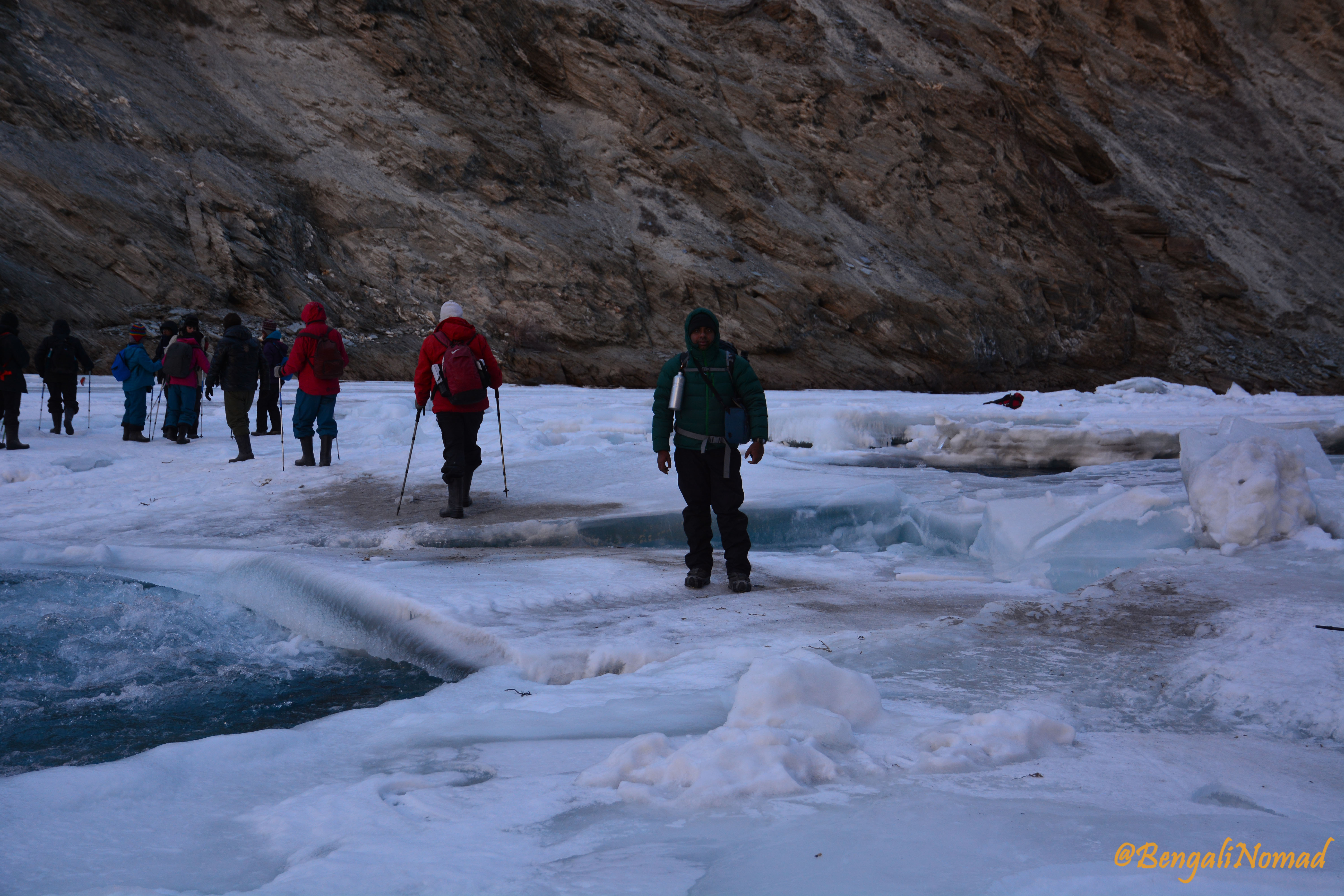 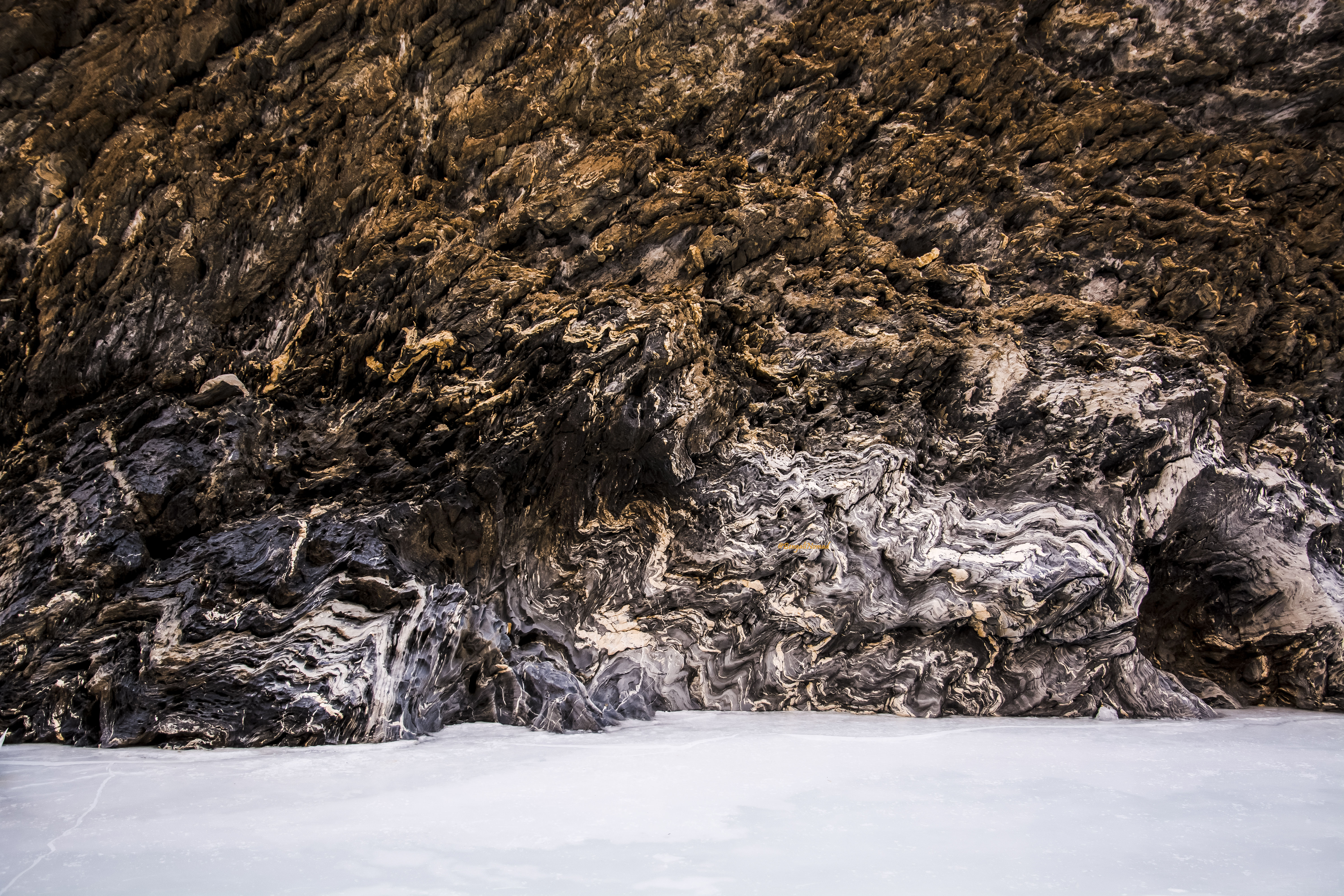 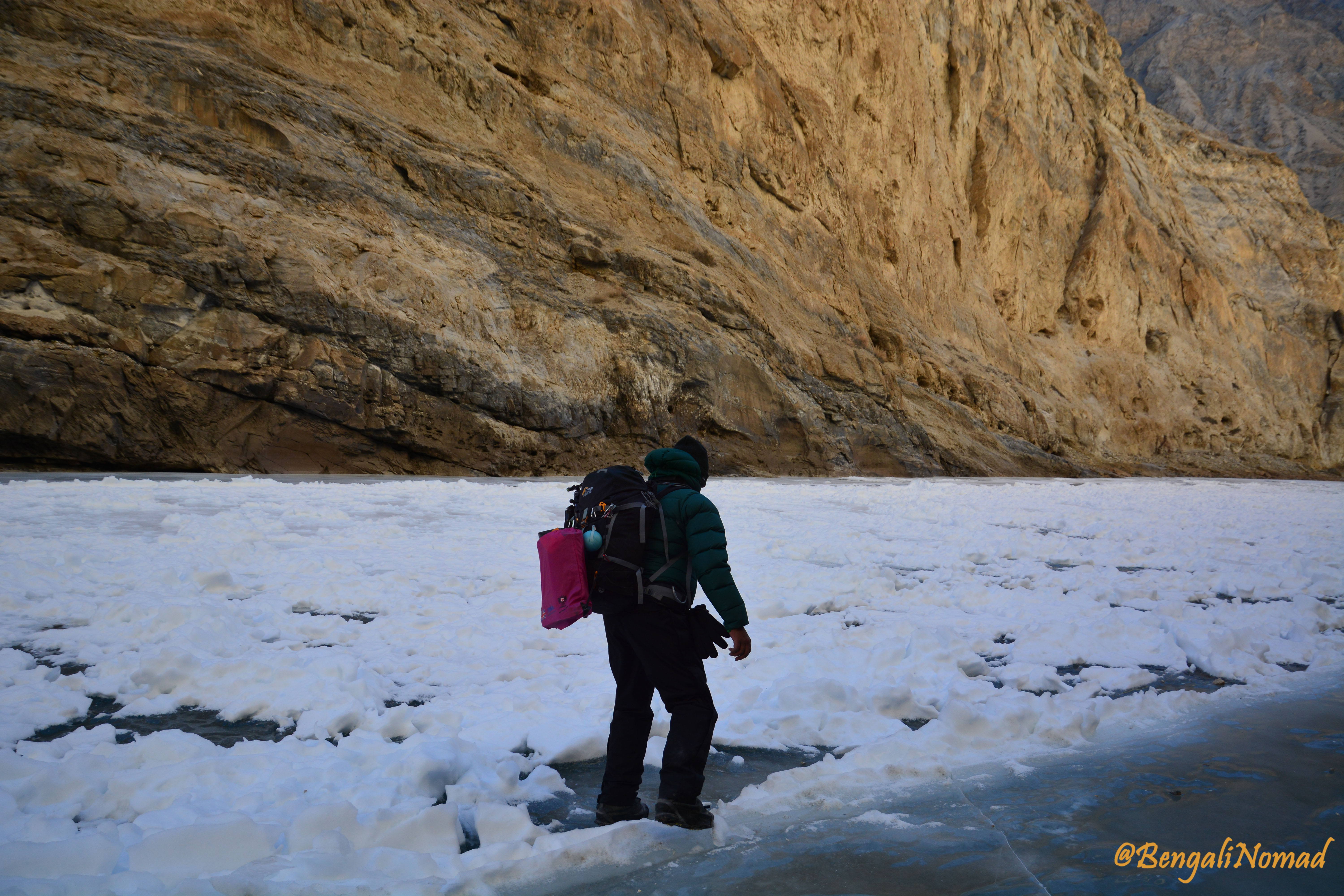 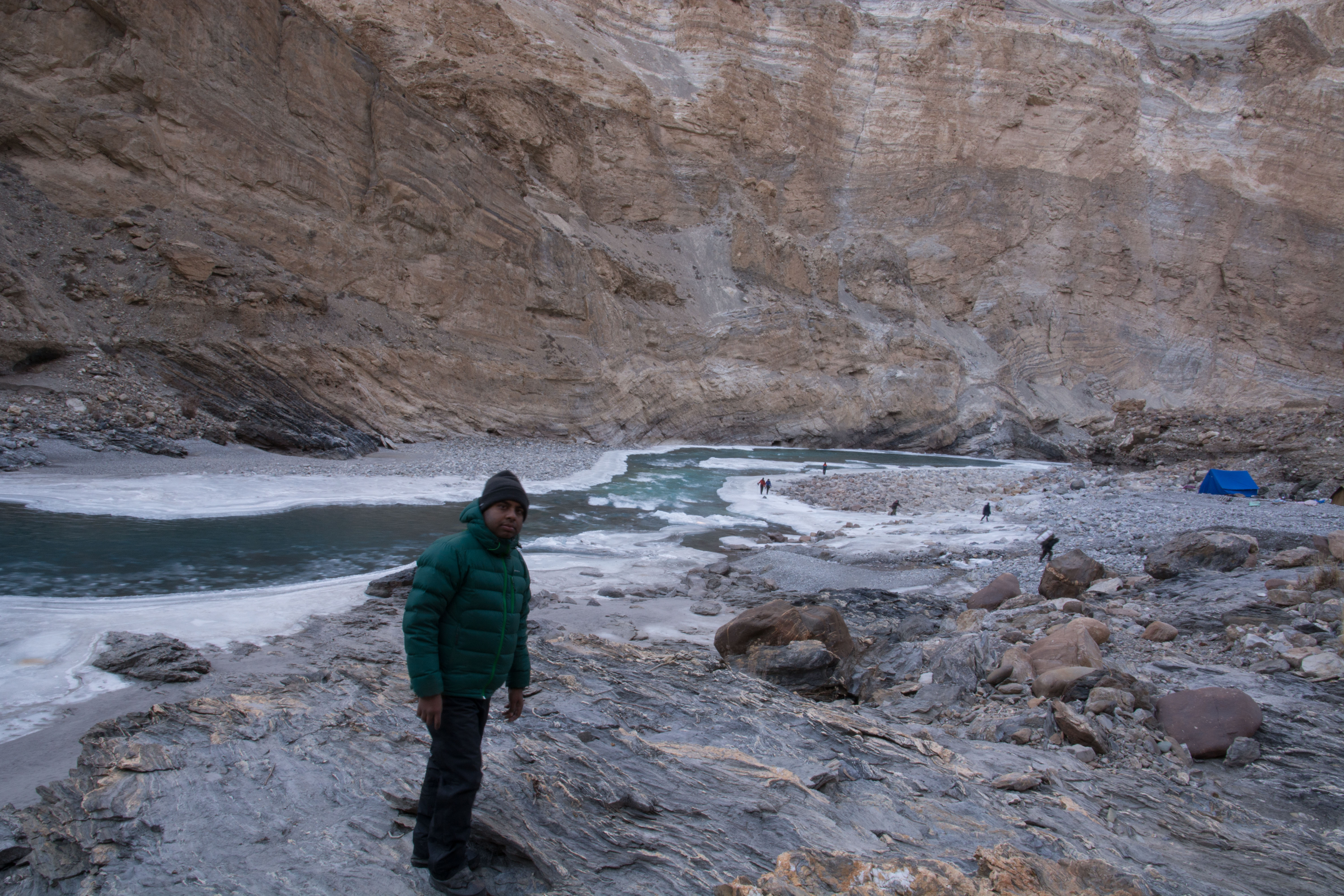 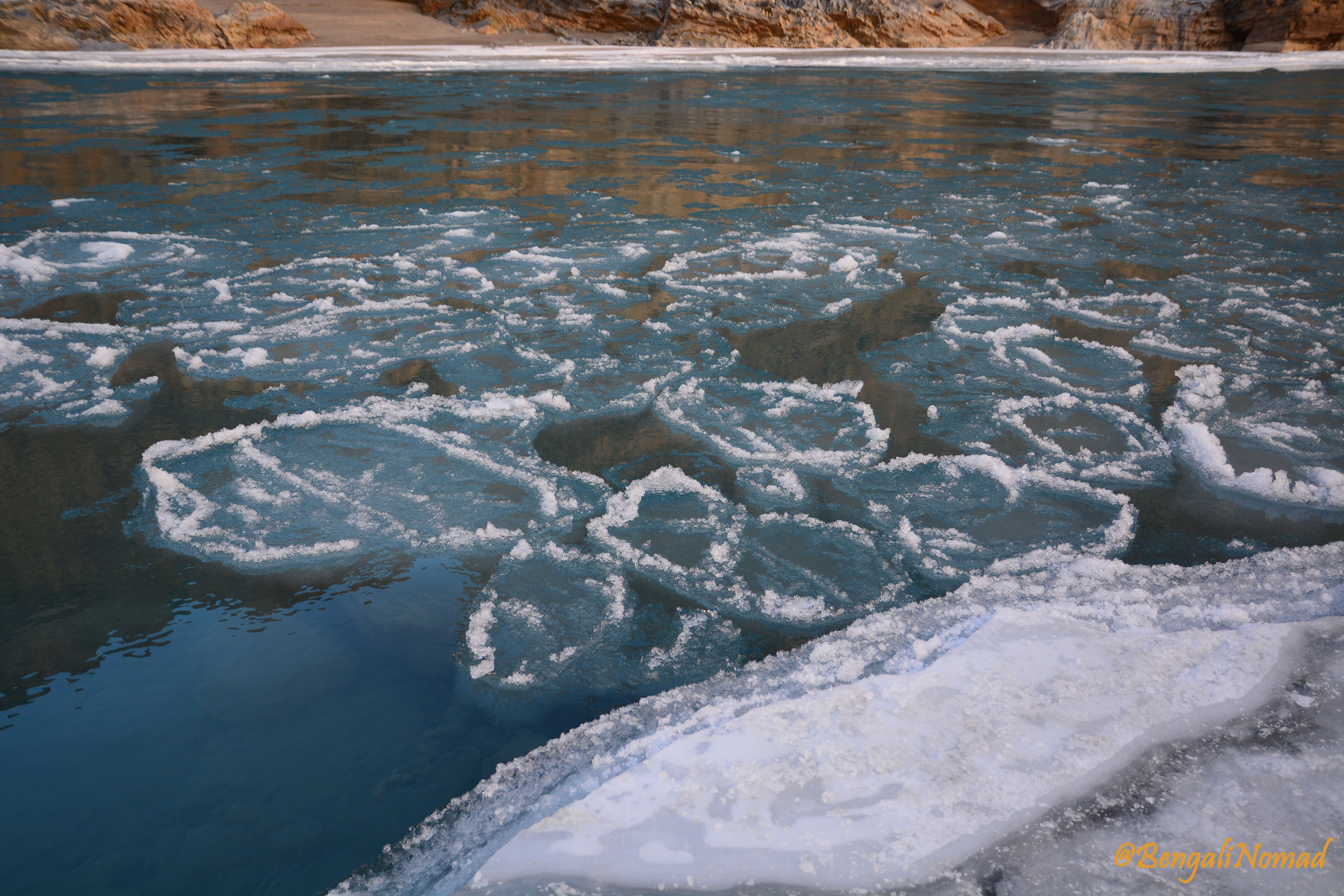 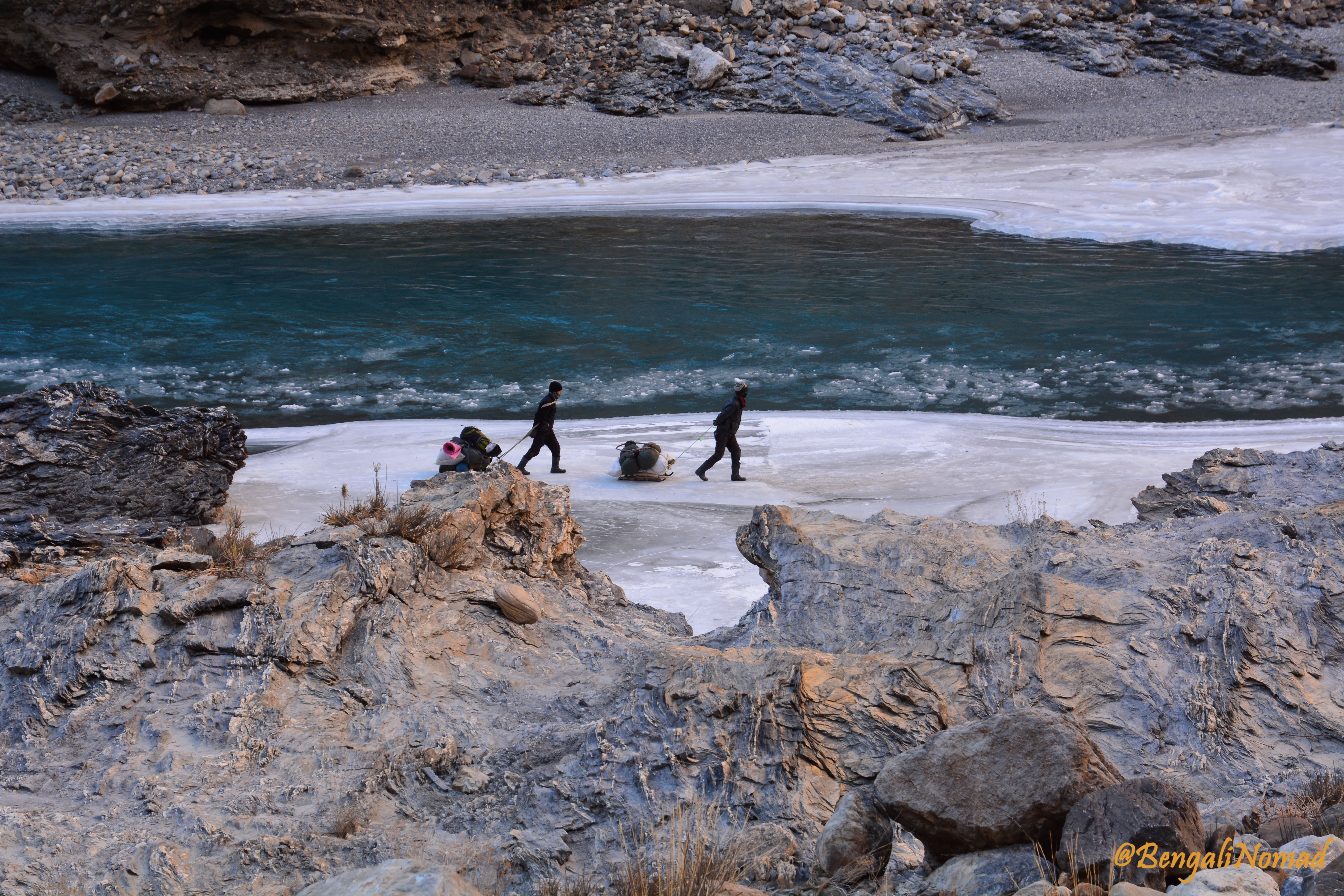 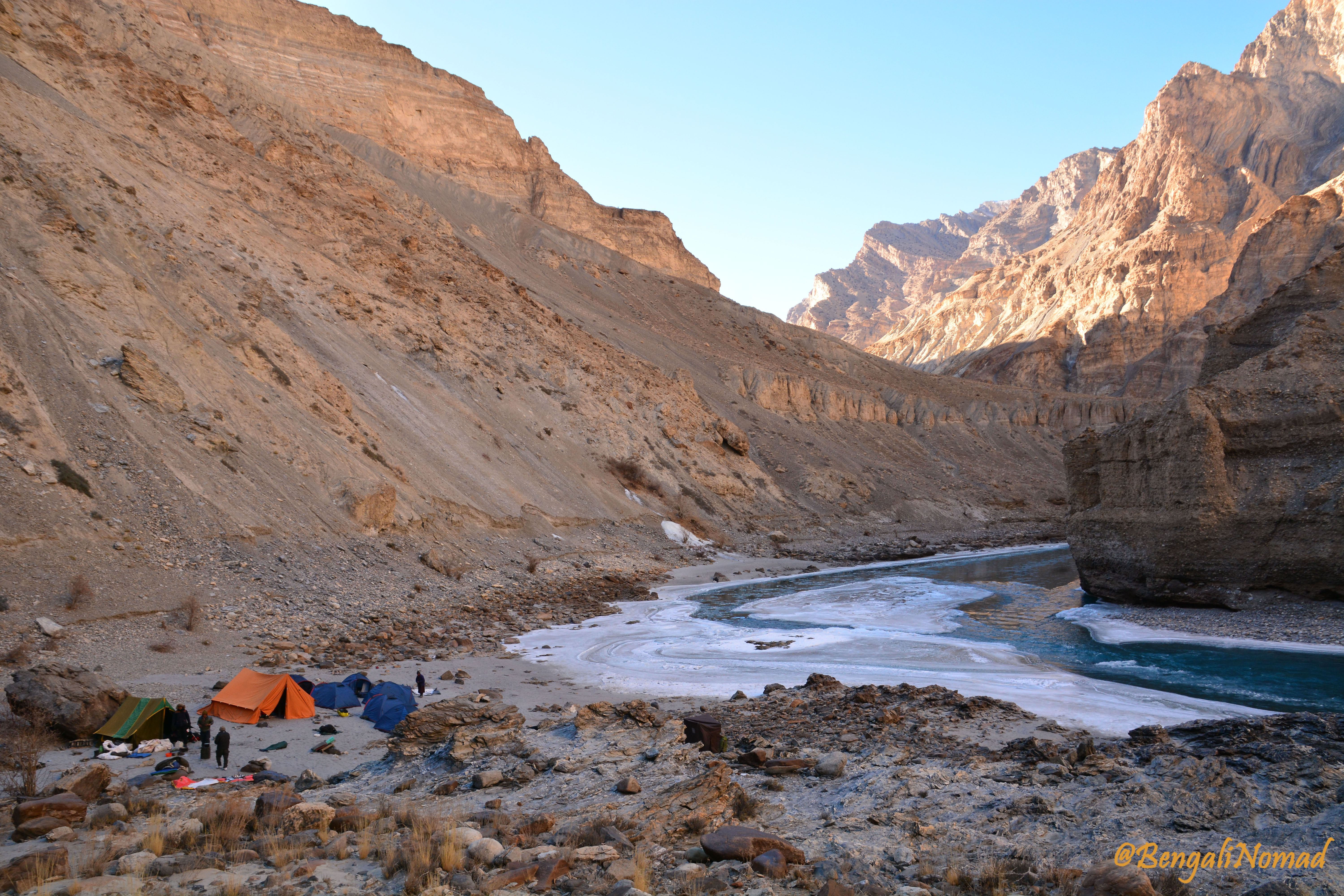 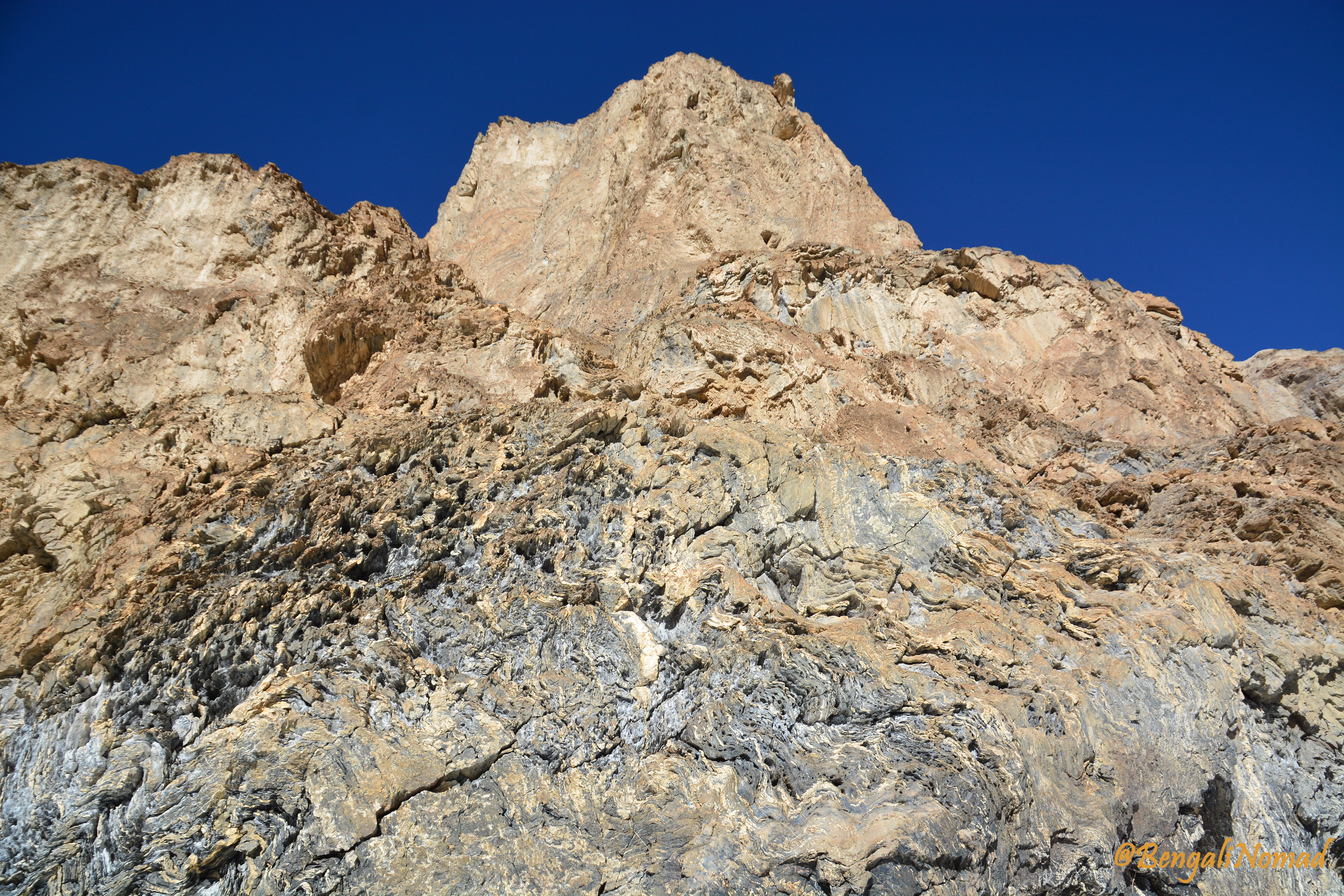 We started our journey by a minibus from Leh. We stopped at Nimu which is the confluence of Indus and Zanskar river and then drove to Chilling. From Chilling the trek started. First step on Chadar was really thrilling. Day 1 was relatively easy we camped at Tilat Sumdo. Day 2 was longer . We camped at Tsomo Paldar. Chadar had so many forms , sometimes its solid like glass sheet ,sometimes its slushy and some other time its thin and creaky.

Chadar was good for first two days. Third day Chadar was completely broken before Dibb. We had to do some climbing along the gorge to circumvent broken portions of Chadar.

It is not easy to find woods to make campfire at night. Temperature at night could easily go down to -35C. I was doing this trek during full moon nights .  Because the gorge is deep and narrow, one  side of gorge illuminates when moon rises and light reaches to Zanskar river when

moon is almost at 60 degrees. The  river glitters like silver . Standing at the edge of the ghostly river at -30 C at the middle of the night in complete solitude makes one feel how small we are and how trivial are our ambitions, desires and problems for which we waste our lives.Next day from Dibb we started towards Narek. All  groups were turning back because Chadar is completely broken . We decided to

continue till the point there is no Chadar, this place is near a bend where river suddenly narrowed down . It was not possible to climb to the Cliff next to it, so we decided to wait till Chadar is formed. There was no Chadar after 5 hrs , so we put up our camps there. Next morning Chadar formed at places and water level also reduced , so we decided to continue. We started walking towards Narek and frozen waterfall. Again Chadar was not great at places so we had to do a lot of climbing, we reached Narek at lunch time. Half of the group decided to continue towards Lingshed village . I decided to rest at Narek and explore the village which is a steep climb from the campsite. This the only village in Chadar route which has a satellite phone . For any emergency porters need to reach here to call for help. I was offered the inevitable cup of tea in the village latter I visited the village monastery.

Next day we started our return journey. We had taken same route. Chadar was much better this time. My bad luck started from here. Two days before Leh , I broke my elbow. Without any treatment and with just a temporary sling I had to trek for two days to reach Leh.

PS: Chadar trek is one of the last few wilderness left in India. Due to global warming , characteristic of Chadar is changing a lot and its not freezing properly anymore. A new road is being constructed along Zanskar river up to Padum . Once the road is complete in next few years , Chadar trek will loose its charm and by that time due to temperature rise Chadar will probably disappear forever  .

PPS: After reaching to Leh I was told my fracture was really bad and I had been very lucky that there was no open wound and my nerves were still functioning. Otherwise I might have lost my left hand. I took very next flight to London. Doctors were doubtful about my elbow movement after surgery. I was under a very specialized surgeon and elbow strength and movement gradually became normal. I will have a long scar in my elbow for the rest of my life to remind me of this adventure.